Microshare ended the first half of 2020 with smart and positive coverage from the world’s most powerful broadcaster, the BBC, as global attention and demand for its market-leading Universal Contact Tracing solution continued to build.

In a June 30 piece, the BBC declared that Microshare’s approach to contact tracing – a vital element in helping the world’s businesses, governments and other economic players bring people out of quarantine – uniquely prioritized individual privacy to help secure people from COVID-19 infection.

“Everything we’ve done is designed not to open a gateway into your personal habits, your Facebook feeds,” says Michael Moran, Chief Risk & Sustainability Officer at the Philadelphia-based data company. By picking up a lanyard or wristband, the worker is giving implicit consent to being tracked, he suggests, until the end of the shift when the device is returned and they leave knowing they are no longer being tracked.

While firms like Microshare aim to protect privacy, the truth is, we may have to accept some level of incursion, says Mr Moran, as we accepted enhanced security measures following the 9/11 terrorist attacks, as a trade-off that is necessary to protect us.

The BBC report follows a wave of attention for Microshare’s contact tracing and “Clean = Safe” building intelligence solutions. In mid-June, The New York Times published a comprehensive report on how the world’s offices, factories and other facilities are preparing to reopen after global COVID-19 shutdowns, The New York Times this week featured Microshare as the leading example of how to secure a workforce with Universal Contact Tracing that does not depend on unreliable smartphone technology.

The Times quoted Microshare CEO and Co-Founder Ron Rock extolling the virtues of using a simpler, less expensive and more reliable solution based on wearable Bluetooth and LoRaWAN technology.

The New York Times piece also was picked up by the Chicago Tribune, the Vancouver Sun and a host of trade publications in the manufacturing and healthcare sectors.

Getting the balance between privacy and safety right has been a focus of Microshare for years, and never has that balance been more important – or more in the public view – than with contact tracing. From the launch of Microshare’s Universal Contact Tracing solution in late March, the company has made it clear that smartphone app-based solutions not only have severe problems of performance and practicality, but also potentially open up those who download such apps to security and privacy violations.

Microshare has published an animation that demonstrates how Universal Contact Tracing works. The solution provides anonymized, searchable contact data in workplaces and other environments where social distancing alone may not be enough. Microshare deployments are planned in factories, mines, airports, dormitories, universities, corporate campuses, prisons and other facilities. 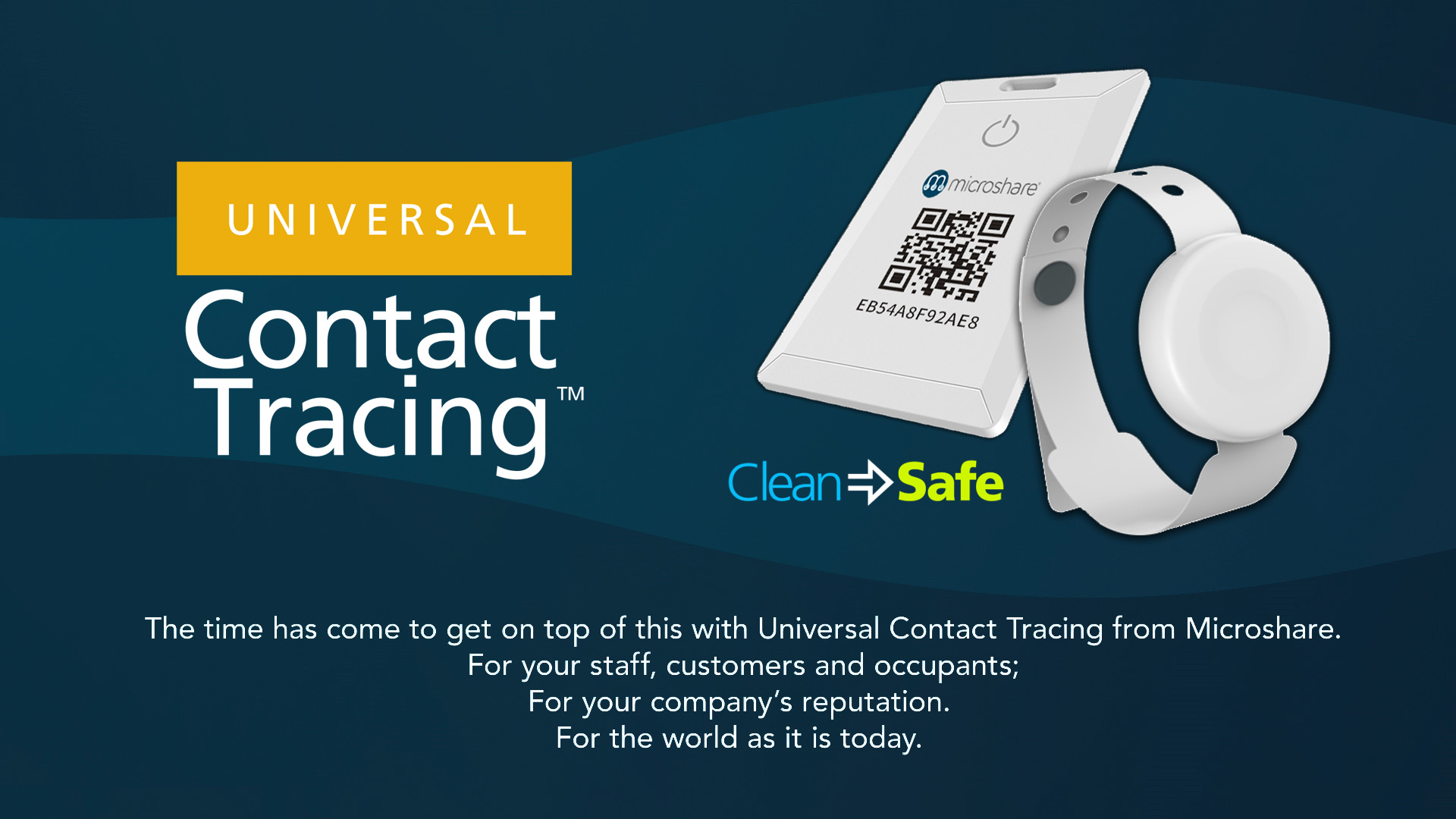 Microshare deploys Bluetooth-based, long-battery life wearables that avoid the many pitfalls of using smartphone apps, which are vulnerable to privacy and security breaches, subject to battery failure or user disabling, and are impractical or forbidden in some environments. Indeed, smartphones that are ubiquitous among wealthy western consumers are not universally adopted in the developing world, where they remain an expensive luxury.

Universal Contact Tracing has drawn huge interest from industrial and government entities in the developing world, where smartphones simply are not a practical way forward. Reuters recently reported that the government of Singapore was weighing whether Microshare’s solution could fix the problems it and other nations have had trying to contact trace using smartphone apps.

The Microshare approach, which uses LoRaWAN™ low-power, wide-area gateways rather than expensive cell phone or less accurate global positioning system (GPS) data. Universal Contact Tracing operates with Bluetooth beacons embedded in wristbands or badges. The gateways are positioned around a facility to receive and provide a secure data backhaul that creates a historic database of contact events.

Should a diagnosis of COVID-19 affect an occupant of a given building, building owners can run a reverse query and identify where contact events took place and can choose to recommend that the affected people self-quarantine and seek medical advice or any other action dictated by their own policies or by local regulators. The system also indicates which rooms affected people occupied and these rooms, and only these rooms, are designated for disinfection and deep cleaning, minimizing disruption.

Universal Contact Tracing was featured on the front page of the Financial Times on April 27, part of a wave of attention to its innovative technology that has boosted global exposure and sales the company.