Amid a global spike in COVID-19 infections and related economic lockdowns, Microshare’s Universal Contact Tracing solution is helping some of the world’s largest corporations operate safely and prevent widespread outbreaks, according to a Nov. 16 report in The New York Times.

Characterized as “hot new tech” by the self-described paper of record, the story cites testimonials from Microshare clients Glaxo-SmithKline (GSK) and Rent-a-Center as examples of how the Bluetooth enabled wearables are striking a careful balance between effective tracking of hazardous contact events and shielding wearers from undue invasions of privacy.

“Wearable devices that continuously monitor users are the latest high-tech gadgets to emerge in the battle to hinder the coronavirus,” the paper reports. “Some sports leagues, factories and nursing homes have already deployed them. Resorts are rushing to adopt them. A few schools are preparing to try them. And the conference industry is eyeing them as a potential tool to help reopen convention centers.”

Microshare introduced Universal Contact Tracing to the market in late March, soon after the virulence of the virus became clear and the global economy began to slow as result of the resulting shutdown orders. Developed and battle tested in tandem with GSK and other clients for whom remote working was not a long-term option, the wearable contact tracing solution has since been deployed around the world in manufacturing, healthcare, office, residential and mass transit settings.

“We had senior leadership who initially said, ‘the solution is good, not fantastic,’” says Budaja Lim, Glaxo SmithKline’s Southeast Asia Regional CIO and head of innovation who helped lead the UCT pilot deployment in Malaysia. “But after reviewing a month of contact tracing data, the statement was changed: ‘This isn’t just good, it’s fantastic!’ We’re now viewing this as not only a reactive but a proactive risk management tool.”

As the paper notes: “In Plano, Texas, employees at the headquarters of Rent-A-Center recently started wearing proximity detectors that log their close contacts with one another and can be used to alert them to possible virus exposure.”

Another deployment, at nursing homes in the UK, is subject to a large test of the wearable solution at care homes in the country. As in the US and other nations, COVID-19 was responsible for a tragically high number of deaths and illnesses in residential settings caring for the elderly.

Cyd Akrill MBE, Springfield Healthcare Group’s Director of Nursing, said the Microshare wearables “could significantly improve the quality of life for the people in our care. Safety is of the utmost importance but the ease and simplicity of the device could be game changing for us. To have detailed data to inform our infection, prevention and control allows us to make better informed decisions around visiting – improving safety and the quality of lives for the people we support.”

Regarding legitimate privacy concerns, the paper acknowledged that Microshare “had thought deeply about the novel data-mining risks and had taken steps to mitigate them.” 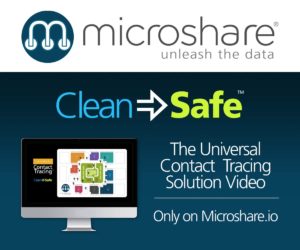 Microshare CEO and Co-Founder Ron Rock told The Times: “’The system does not continuously monitor users’ locations. And it uses ID codes, not employees’ real names, to log close contacts.’” Rock added that the system was designed for human resources managers or security officials at client companies to use to identify and alert employees who spent time near an infected person, not to map workers’ social connections.”

Unlike smart phone contact tracing apps, Microshare’s wearables do not collect PII – “Personally Identifiable Information” – a significant barrier to smart phone app adoption. The wearables, with long battery lives and the implicit consent of the wearer, are also not susceptible to the frequent dead batteries and poor WIFI and cell coverage that plague cell phones in many settings.

Getting the balance between privacy and safety right has been a focus of Microshare for years, and never has that balance been more important – or more in the public view – than with wearable contact tracing in a global pandemic. From the launch of the solution earlier this year, the company has made it clear that app-based solutions not only have severe problems of performance and practicality, but also potentially open up those who download such apps to security and privacy violations.

The Microshare wearable solution provides pseudonymous, searchable contact data in workplaces and other environments where social distancing alone may not be enough, allowing companies to conduct reverse database queries to assess exposure and identify effected people when COVID-19 symptoms are reported. Microshare is deploying the solution in factories, mines, dormitories, corporate and university campuses, military barracks, prisons and other facilities.

Microshare Universal Contact Tracing relies on Bluetooth-based, long-battery life wearables that avoid the many pitfalls of using smartphone apps, which are vulnerable to privacy and security breaches, subject to battery failure or user disabling, and are impractical or forbidden in some environments. Indeed, smartphones that are ubiquitous among wealthy western consumers are not universally adopted in the developing world, where they remain an expensive luxury.

“Companies and industry analysts say the wearable trackers fill an important gap in pandemic safety,” the New York Times report says. “Many employers and colleges have adopted virus screening tools like symptom-checking apps and temperature-scanning cameras. But they are not designed to catch the estimated 40 percent of people with Covid-19 infections who may never develop symptoms like fevers.